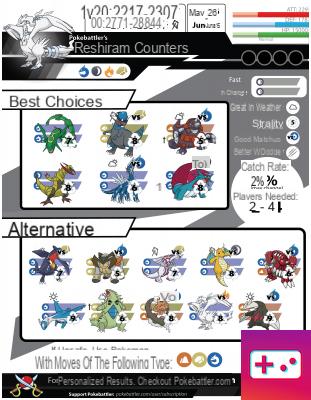 Reshiram, the Vast White Pokémon, is one of the best known and most powerful legendary Pokémon. Regardless of your moveset, it has the potential to defeat any Pokémon in battle. But, to make sure your Reshiram is the best of the best, it's not just about leveling them up, you also need to choose the right moveset!

Since Reshiram is a dual Dragon/Fire Pokemon, it's a good idea to focus on these types of attacks. Dragon-type attacks are generally considered some of the strongest attacks in the game, but it's good to use one of the other attack types as a backup if you're up against a Fairy Pokémon.

For Reshiram, Fire attacks are best, but obviously only against Pokémon weak to them or strong against Dragon attacks. You'll want to rely primarily on Dragon attacks, as the Dragon-type has a lot of strengths and few weaknesses.

That's all you need to know about the best movesets for Reshiram!

Want to know more about Reshiram? Be sure to check out our raid guide for Reshiram to see its weaknesses and best counters!

add a comment of Best Movesets for Reshiram in Pokémon Go