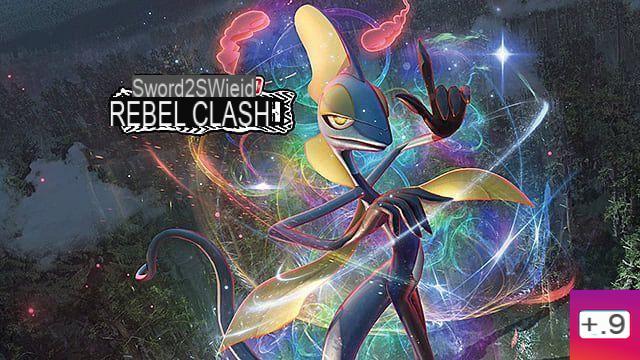 There has been a lot of talk regarding the new supporter rule in Pokemon TCG, which arrived with the game's previous expansion, Sword and Shield. The new set, Rebel Clash, continues with the same themes and includes more supporters and Pokémon VMAX.

Dragapult is currently considered the strongest VMAX Pokemon in the game, and it has a solid reputation in the market, including its initial base form Dragapult V.

There are some exciting energy and suppression cards too, so if you're looking to invest this season in Pokemon TCG, check out this guide for the most expensive Rebel Clash cards.

The Double Colorless Energy card won't be returning to standard Pokemon TCG any time soon. But The Pokemon Company gave us the new Twin Energy, which is somewhat similar, but with some restrictions for GX and V Pokemon.

That said, there's no doubt that Twin Energy will transform the standard meta and make most decks truly powerful. Energy Accelerators have always been very effective in any expansion, and this one is no exception.

As for the market price, it looks like there's even more room to grow, so keep your eyes peeled for this little gem of a card.

If you plan to play the new Dragapult VMAX evolution platform as standard, you simply cannot skip this basic version of Dragapult V.

It's obviously not as strong as the VMAX evolution, but you definitely need it for your combo. This is why the basic version of Dragapult V will always follow its older brother VMAX like a shadow.

This is a great marketing solution from The Pokemon Company, which basically makes you buy or sell two cards instead of one. This raises the price of both, since no one will be playing the base version V alone.

Many standard decks have been implementing tool cards for a while now. This is because there is no way to remove them from the board.

But with the arrival of a Tool Scrapper card in Rebel Clash, that might be a thing of the past. Each player will have Tool Scrapper in their rosters, so they can get rid of all of the opponent's tools in play.

This is a game-changing card that came at just the right time, and it looks like the $15 tag on this rare, secret print of the card is just the start.

When you combine poison with lightning, something really dangerous comes out. That's basically a one-sentence Toxtricity profile.

Many players have combined Txotricity VMAX with Garbodor for an incredible effect, which deals a lot of damage. So if you like to KO-Pokemon your opponent then this is the card for you.

However, a specialized game guarantees a high-end profile for Toxtricity VMAX, so it currently occupies a slightly lower position compared to other more important VMAX cards from Rebel Clash.

While $15 for a hyper rare card isn't much, the power level of this beast will be proven for sure in future tournaments.

Sonia is the current replacement for Roseanne's Research, which left the standard format. This support card fills the niche quite well, but not quite well.

However, since there is nothing similar in the format, which can recover basic Pokemon or Energy cards, Sonia becomes very useful until something else comes out in future expansions.


If you want to invest in Sonia, do it now. The price situation may change as soon as something better appears in the format, which probably won't take too long.

This is a premium item card in Rebel Clash. Scoop Up Net will see play in every single deck that runs non-V and non-GX cards.

Players running Blacephalon or Jirachi Prism combo decks will definitely have fun playing Scoop Up Net. This not only involves the obvious 'return in order to heal', but also a few other tricks that require you to pick up Pokemon from the active spot.

The current price is as high as it is for item cards, so even if it works as expected, you still have to wait until the price stabilizes slightly.

Galarian Perrserker's main appeal is its ability to add more damage to all of your metal-type Pokemon.

This means it can be used in high-end decks like Zacian V, Melmetal GX, and Metal Saucer. However, since the metal sinkers haven't advanced too far lately, it makes market investors a little cautious, which keeps the price at reasonably low levels.

The future of this card depends on how metal decks perform this season. If things are going really well, then expect an inevitable price increase, and if Galarian Perrserker damage-based decks don't find a place in the meta, then they should drop to around $10.

For a V-type Pokémon, Eldegoss has pretty low HP, but that hasn't stopped it from becoming the best grass support Pokémon in the game.


Most decks won't rely on it, but it will play its part by sitting on the bench and returning discarded support cards to your hand. It's not a revolutionary ability, but very useful.

The price range for Eldegoss V has already been pegged at around $20, which is exactly what it should be: not too expensive, but not too cheap.

This VMAX Pokémon has become the central pillar of one of the most powerful new decks in the Rebel Clash meta.

He uses Horror Psychic Energy's power, Scoop Up Net and Dragapult's ability, Max Phantom. Many players also performed Giant Bomb alongside in order to get maximum damage from energy cards.

Either way, Dragapult VMAX is the clear winner of the meta, and it has all the strong indicators of a card that can boost the price as soon as pro players get a feel for how strong this VMAX Pokémon is. listing.

Currently, there are two big decks playing Frostmoth. One is a combo deck that uses synergy with Lapras VMAX, and the other is a mailing list that combines Frosmoth with Eiscue.

Both of these games have done very well since the release of Rebel Clash thanks to the Frosmoth Ice Dance ability, which brings water energy into play as many times as needed.

All of these factors add up to a pretty high price for this non-V, non-VMAX card, which is unusual, but not surprising considering the power level of the combos.

Order of the boss (hyper rare)

This is the type of card that will be played in almost any standard format deck. You'll see at least two - or even three - copies of boss orders in every deck. It's just good.

This makes it the most wanted support card in the Rebel Clash, which naturally increases the market price. The hyper-rare aluminum print is particularly valuable, as it now sits at around $40.

It's not the most expensive standard card in history, but it will hold that price for a while, which is especially important for investors.

These are the most expensive cards in the latest Pokemon TCG Rebel Clash expansion. Be sure to check out other Pokemon articles and lists here.