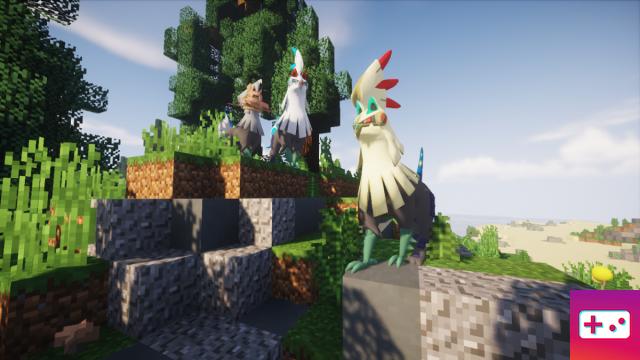 /race Gives the player an egg from the specified Pokemon. If the Pokémon cannot reproduce, the command fails. /breed Attempts to find two Pokémon in the player's party that can breed and spawn an egg if successful. /checkSpawns [specific | type] Displays the luck of all Pokémon likely to appear in the player's area. If a specific argument is added, checks only the block the player is on. If the type is added, only spawns of that type are displayed. /dynamaxband Gives the specified player a Dynamax Band. /endbattle [player] Force which battle the player is in, if any. If no player is specified, this applies to the player who forced the command. /Freeze Enables or disables the movement of all Pokémon in the world. /givemoney Gives the specified player the specified number of PokéDollars. Negative values ​​take money from the player. /givepixelsprite(player)

Gives the player a photo of the specified Pokemon. /legendary Attempts to spawn a legendary Pokemon near the player who performed the command. /megaring Gives the selected player a mega ring. /pokebattle Forces a battle between the specified players. /pokebattle2 Forces a double battle. The first and second arguments have one team, and the third and fourth arguments have another team. If Pokémon Trainers or NPCs are used for an argument, they are controlled by the AI. Any Pokemon used in the arguments will have levels equal to the highest level Pokemon of the person who performed the command. /pokegive

[arguments] Spawns the specified Pokemon. /pokestats Displays the number of times the specified player has lost or won a battle. /printstore Saves brief descriptions of all currently loaded player Pokémon storage data. /psnapshot read Loads a set of blocks previously saved to a file by /snapshot save. /psnapshot set Sets a corner of the area to be recorded at the player's location. /psnapshot save Saves the blocks in the area defined by the two previously defined corners. /psnapshot place Copies previously saved blocks and places them where the player is. /psnapshot convert Converts a snapshot created in version 1.8.9 and below to be compatible with version 1.10.2. /redeem Allows the player to redeem an exclusive hat, if available. /redeem trainerhat [ ] Allows the player to redeem a trainer hat if they have a linked Minecraft account. /redeem Allows the player to trade in a special texture for a specific Pokemon, if available. /swap toggles Toggles a player's belt, robe, monocle, or hat. /reloadquests Reloads all available external JSON files for quests. /resetpokestats Resets the tracked wins and losses of the specified player to 0. /setparty [moves] Permanently sets the levels of all Pokemon in the player's party to the specified level. The addition of the moves argument prompts the player to choose four moves from each Pokémon's move pool. /setstage [player] Sets the player to the specified quest stage number. /spectate [player] Forces the user to watch the battle the specified player is in. If no player is specified, this forces the user to stop watching. / structure | [ ] | list Appears a specified structure near the player if possible. If no structure is specified, generates a random structure. If the list argument is used, the command instead lists all structures that can be generated. If the level argument is used when creating a gym, specifies the level of the NPC trainers inside. /learn [player] [position] Causes the Pokemon in the specified position of the player's party to learn the specified move. If no player is specified, it happens to the player who issued the command. If no position is specified, it happens to the primary Pokémon of the player who used the command. / transfer

Unlocks any Pokemon owned by the specified player that is locked by a ranch block. /warpplate set Sets the warpplate the player stands on to reach the specified coordinates. Does not work if the user is not standing on a chain plate.