Platform fighters will always face unfair comparisons and be labeled as clones. It's an entire subgenre perpetually held to the standard of Nintendo's monster IP, Super Smash Bros. Fortunately, this notion has not stifled development.

If anything, it actually helped inspire games like Ludosity and Fair Play Labs' Nickelodeon All-Star Brawl. The desire to make All-Star Brawl something that could potentially rival Smash in terms of quality is evident from the first game or two. The fights are solid.

However, there are a few issues that prevent All-Star Brawl from shining as brightly as possible.

As a platform fighter, Nickelodeon All-Star Brawl's foundation is made up of all the usual elements. Battles take place in 2D arenas with floating platforms, a moving camera, and occasional environmental hazards. Health bars are absent, replaced by percentages that count as players take damage.

A high percentage doesn't necessarily equate to instant death, but rather the distance a character will travel when hit; damage accumulation makes players more likely to be knocked out of a given level.

The goal here is to send rivals flying in a way that prevents them from returning to the arena. This can be done with well-placed mid-air attacks that prevent opponents from hanging onto a ledge or a powerful strike that sends them to the corner of the screen, resulting in an instant knockout.

The amount of damage required for these maneuvers to work varies. For this reason, players will want to keep their percentages low while increasing their opponents' percentages.

All-Star Brawl also features a familiar control scheme: a jump, grab, block, special, and a few attack buttons. Quick light attacks are great for taking out freshly spawned enemies. The slower heavy attacks are best used after building up a bit of damage, as they will send enemies into fairing.


Both sets of attacks are directional; holding and pressing the powerful attack button knocks players into the air, launching them upwards, for example. The same goes for the special button. Pressing it to neutral can send a projectile while holding it, and hitting it grants a saving third jump. 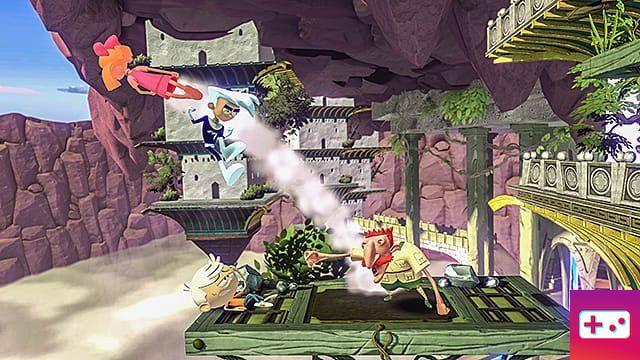 Again, these are the things we expect from a platform hunter. There are, however, a few interesting elements that flavor All-Star Brawl combat.

Take the lock button. Usually players can only block once in a while before becoming vulnerable; the constant hits weaken their defense. In All-Star Brawl, it is possible to block somewhat indefinitely, with the mechanic being balanced by a player's proximity to a ledge.

When blocking attacks, players are constantly pushed backwards. If pushed near the edge of a platform, they begin to topple over, becoming vulnerable and unable to attack for a few seconds. It is a wrinkle that allows the attacker to attack or grab them freely.

Speaking of grabbing, All-Star Brawl allows each character to grab a rival's projectile and throw it back at them. It is also possible to hit projectiles back and forth using basic attacks, with each hit increasing a projectile's speed and power. Of course, it doesn't work for AoE moves, though. It is not possible to repel Reptar's ground fire breath, for example. But overall, these mechanics make for interesting moments that are often tied to specific characters in other games. 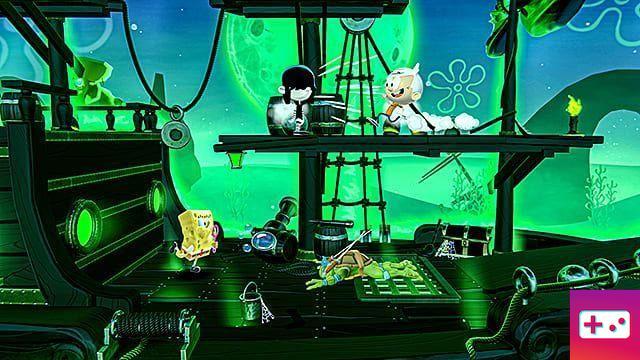 Another unique feature here is the ability to strafe. By holding down L/L1/LB or the right button Ctrl, it is possible to move a character in one direction while facing another. This can be used to evade enemies while hurling projectiles at them, or as a strategy to trick them into suddenly changing direction mid-jump, causing them to launch into an attack.


These types of maneuvers are amplified by rolling waves and an intriguing rock-paper-scissors attack system. Pressing the block while jumping causes a jump in the air. Press the two buttons on the ground and they'll dash forward, speeding up their movements to dodge attacks and/or close the distance between themselves and their opponents.

The rock-paper-scissors system centers around clashing powerful attacks – where two players strike simultaneously during a fight – giving one player an advantage over the other. For example, a neutral (or medium) strong attack will defeat an up attack, forcing the other player to face the opposite direction.

On the other hand, an upward attack swings downward, rotating the attacking opponent downward, effectively stunning them. A similar thing happens when a Down attack beats a Mid.

All-Star Brawl has the basics to make it a compelling fighter. And for the most part, he succeeds. Trading blows is always fun. There are no contestable items like in Smash or Brawlhalla. Still, the fights are often chaotic, with players sending each other back and forth.

The character roster is generational in scope, welcoming fans who grew up on shows like Ren & Stimpy, Aaahh!!! Real Monsters, The Loud House and SpongeBob SquarePants. Most cards are well designed, the best are the ones that actually use a given Nickelodeon IP. Essentially, at a basic level, Ludosity and Fair Play Labs have done a solid job in this department. 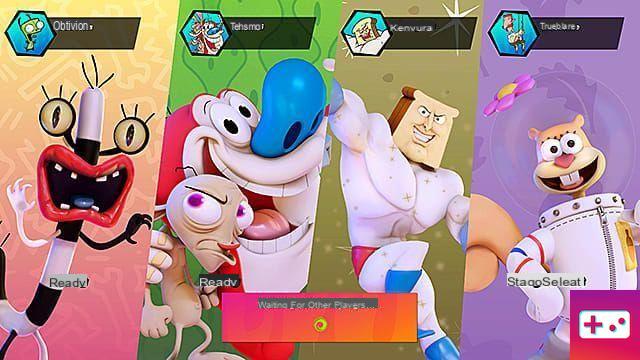 While All-Star Brawl is mostly a good time to wait, it's a little rough around the edges. For one thing, there's no voice work or much classic soundtrack. The original music is nice, and some of it is taken from certain shows (Aaahh!! Real Monsters' scream is used to great effect), but many classics are missing. It seems strange; if Nick allowed these characters in a fighter, wouldn't he allow their music to be used as well?


The game's finer details make up for most of that. Seeing Ren and Stimpy do the Happy Happy Joy Joy dance when they win a match or noticing Grandpa sleeping on a bench in the Rugrats playground-themed map never gets old. There's a lot to love here. Unfortunately, All-Star Brawl can sometimes be a pain to play.

All-Star Brawl's restore netcode - a connection framework that helps prevent latency by fixing/rolling back data - generally works well. However, there are times when the game gets out of sync during a fight. Players can completely disconnect from each other, continuing the match separately until it brings them back to the lobby. You can tell this is happening because your opponent will either be standing in one place or constantly running in one direction.

This out of sync issue happens often enough to be frustrating. This is especially true in large halls. Having four players go head-to-head while a few spectators are asking for trouble. The problems don't end there, however. There are times when players in a lobby can't join a match, and framerate drops can render the game unplayable for 10-15 seconds, leading to a missed attack or death via a wrong jump.

These types of problems negate your desire to continue playing. Local play is fine, of course. But most will want to play online, given the current state of the world. There aren't many options beyond the game's simple Arcade mode. This means that when online issues appear, it's easy to forgo playing All-Star Brawl for something else.

The good news is that the developers are keeping tabs on things. Sporting a fan-driven vibe – backed by feedback from Fair Play Labs' Markus Villalobos on how well they'll listen to/incorporate feedback – the game was set to become a competitive product eventually. Hopefully All-Star Brawl online play will improve over time. 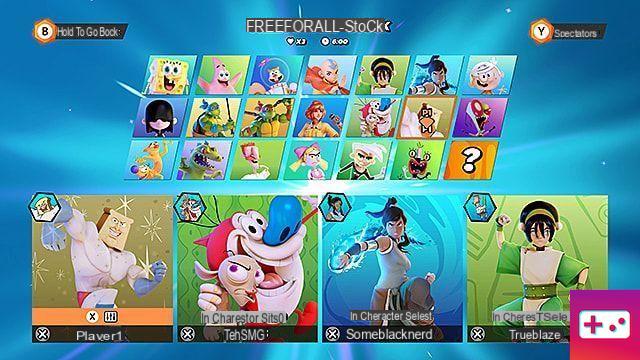 Nickelodeon All-Star Brawl is an entertaining platform fighter. It bleeds nostalgia, has a good roster of characters, and plays uniquely enough to stand on its own for both casual and competitive players.

Online portions are great when things work. There's not much to do when they're not, other than playing local matches and the lackluster Arcade mode. Fortunately, All-Star Brawl was designed with updates in mind.