Vader Immortal is coming to PSVR later this year 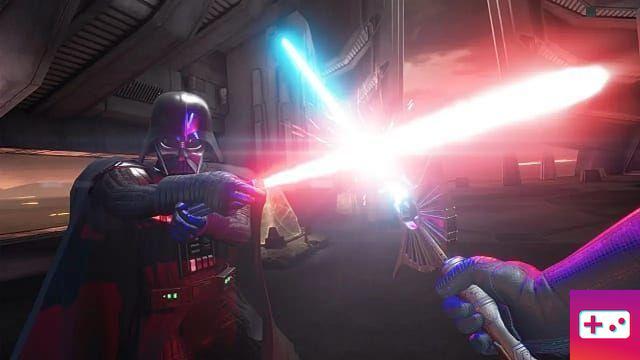 All three episodes of Vader Immortal VR are heading to PSVR, according to a new PlayStation Blog announcement by ILMxLab Executive Creative Producer Mark Miller. All three episodes and Lightsaber Dojos are bundled into a package dubbed Vader Immortal: A Star Wars VR Series for PlayStation VR, and the package will launch sometime later this summer.

Miller explained that the goal behind Vader Immortal was two-fold. One part told a new canon Star Wars story entirely in VR, and the other translated Star Wars storytelling techniques into an interactive game. It immersed you in a Star Wars story and used every tool in the kit to really make you feel like part of the action.

Naturally, wielding a lightsaber plays a big part in Vader Immortal, and Miller's team worked hard to make every parry and swing feel as natural as possible. As the trailers for each episode show, there's a lot more to it than just swinging a laser sword.

You'll use the Force to navigate through Vader's mysterious fortress on Mustafar and use tricks from the Jedi Book to deal with the threats you find there.

So far, there's no word on specific price or release date, though each episode is $9,99 on the Oculus Store. We've had a bit of a slump in Star Wars news since last year's Star Wars Jedi: Fallen Order, so this reveal and unveiling of key art for Lego Star Wars: Skywalker Saga is very welcome.

The full announcement is on the PlayStation Blog. Stay tuned to GameSkinny for more Vader Immortal PSVR news during his flight.

Audio Video Vader Immortal is coming to PSVR later this year
Valheim Black Metal: How to find Black Metal and smelt it ❯